This is a story that few people are happy to tell. It is a story that shining downtown skyscrapers hide. However, the deep wounds on the huge body of Detroit prove it happened and still endures: countless battered dwellings, empty streets and abandoned buildings scar the city.

It is difficult to tell how “the arsenal of democracy” – Detroit grew to be known as this in the early 1940s- transformed into the largest modern-day ghost city. Yet, history is full of contrasts. The pendulum of time often changes its direction. Time and again, where a void is created an opportunity arises.

Indeed, over the last years strong winds of change have been whipping the city. They have blown the fog of the past away and dispersed the mist of decay stifling Detroit’s development for decades. As a result, many of the voids of the city – the wounds generated by depopulation and economic crisis- turned into new epicenters of urban regeneration. They became valuable canvas where to paint new masterpieces of contemporary architecture.

Architects will deal with the area where stood the Joe Louis Arena beside the place where- according to tradition- Detroit’s founding fathers landed. Participants will have the opportunity to design a building complex to redefine the city skyline. They will generate superb architecture masterpieces to become the symbol of the revival of one of the most iconic and controversial cities of the history of the United States of America.

Yac thanks all the architects who will take part in this challenge.


The Power of Steel - Assigned to projects that highlight an extensive use of steel, a key material of the circular economy

In 1989, Daniel Libeskind established its renowned architecture studio in Berlin, after winning a competition to build the Jewish Museum in Berlin. In 2003, the studio moved its headquarters to New York City when Daniel Libeskind was selected as the master planner for the World Trade Center redevelopment, which is currently under construction in Lower Manhattan. His practice is involved in designing and realizing a diverse array of urban, cultural and commercial projects internationally that range from museums and concert halls to convention centers, university buildings, hotels, shopping centers and residential towers.  Some examples of the studio's work include the Denver Art Museum extension (2005), Reflections in Singapore (2011), and the recently completed Ogden Centre for Fundamental Physics in Durham, England (2016). Mr. Libeskind speaks widely on the art of architecture in universities and professional summits. His architecture and ideas have been the subject of many articles and exhibitions, influencing the field of architecture and the development of cities and culture. Informed by a deep commitment to music, philosophy, and literature, Mr. Libeskind aims to create architecture that is resonant, original, and sustainable.

Marie Hesseldahl Larsen, Architect MAA, has worked for 3XN since graduating from the Aarhus School of Architecture in 2006. As Head of Interior, Marie runs the office’s interior team. Marie has also worked in the Competition Department doing conceptual design development and presentation of large scale competition projects, primarily hospitality, office, cultural and public buildings. Marie is highly skilled in design development and detailed functionality, flow and conceptual analysis. She has special competencies in interior design, and as Design Responsible she has developed the interior design for Bella Sky Hotel, Grow Hotel, Stockholm Continental (public areas) and the new Swedbank Headquarters in Stockholm.

In 2004 Giulio Rigoni graduated at the IUAV University of Venice with A. Cornoldi and a dissertation concerning the Ground Zero reconstruction in NYC. He worked in Switzerland in numerous architectural practices as Livio Vacchini (Locarno) and Herzog&de Meuron (Basel). In 2017, he started working at BIG – Bjarke Ingels Group (NYC). In the academic years 2015-2016 and 2016-2017, he was the Assistant of professor Muck Petzet in the Sustainable Design courses of the Academy of Architecture of Mendrisio – AAM. In 2017, he became the Italian Project Architect/Project Manager of the BIG’s project SPFF S. Pellegrino Flagship Factory.

Jean Paul Uzabakiriho is a Design Director based in Kigali, Rwanda. Jean Paul has contributed to much of MASS's built work in Rwanda. He completed his undergraduate studies at the University of Rwanda,and as an architecture student, he participated in a traveling studio to analyze architectural styles across East Africa. He joined MASS Design Group in 2013 as an intern and assisted in the design and construction of Butaro Doctors' Housing and the Butaro Cancer Centre of Excellence. As a Global Health Corps Fellow, he oversaw the construction of the second phase of Butaro Doctors’ Share-Housing. He participated in training held at the Harvard School of Medicine on building design and engineering approaches for airborne infection control. Jean Paul was instrumental in the design and construction of the University of Global Health Equity and is currently overseeing the construction of the Rwanda Institute of Conservation and Agriculture. 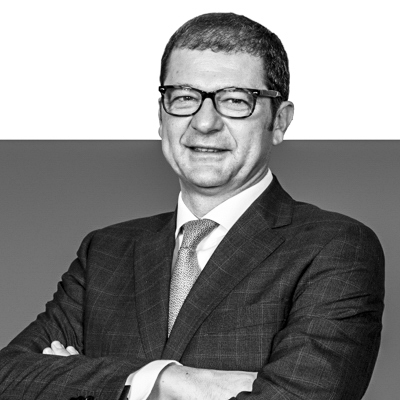 Enrico Frizzera graduated in Economics at the University of Verona. He has acquired technical and organizational skills in the field of financial institutions. Specifically, he deals with insurances and reinsurances by collaborating with the main international consulting companies. After being general manager of the Cattolica Group, he has become Manni Group’s CEO. Manni Group is a company mainly dealing with B2B. It is a leading company in the field of steel products, insulating panels, energy efficiency and renewable sources (industrial, commercial and residential segments).

Claudio obtained his Bachelor of Arts degree in Commercial Law from the University of Milan and also studied Marketing at the San Francisco State University. With his diverse experience he has held roles in both the automotive sector and in publishing.  Holding various commercial roles in his 26 year career history with British Steel, Corus and Tata Steel - Claudio is responsible for a multi-steel product, multi-site portfolio with a cross regional team in Southern Europe. This includes key sectors of engineering, construction and automotive where many of the company’s product brands are targeted.

Rodrigo was born in Santiago, Chile, in March 1976. He received his architecture degree from Pontificia Universidad Católica in 2001. In 2007 he received the Award of the Architects’ Association of Chile for best architect under 35. In 2012 he founded an initiative that brings together Chilean architects around the problem of urban housing, and the relationship between private development and public life. He is Architecture design professor at Pontificia Universidad Católica and has run his own architecture studio since 2003.In his studio has developed projects in a wide range of areas. In the hotel sector highlights the Casino & Hotel of Talca and the Elqui Domos Astronomical Hotel; in industrial area the development of projects for Quintay and Emiliana Vineyards; in the institutional sphere the Faculty of Economics of UDP and in residential de development of Duque House, with which he won the prize for the best work in the residential category at the Architecture Biennale of Santiago in 2004. His works have been published in specialized magazines in more than 15 countries.

Marcos began his architectural career at John McAslan + Partner’s  following his graduation from Westminster University. 20 years later he is still passionate about design and has a keen interest to help move society to a more sustainable future both in a professional and personal capacity.  He successfully established aLL Design in 2011 with the late Prof Will Alsop and currently heads up the UK and international studios setting the direction of the Practice and leading new business development. Marcos is well known within the industry and regularly invited to judge architectural competitions - such as the World Architecture Forum (WAF) and most recently the Chelyabinsk 2020 Airport, Conference Centre and Park competition . With an inherent design background, he uses his collaborative skills to bring out the best in people, which in turn helps produce work with a well thought through approach to art and design, balancing creativity and commerciality. His broad range of experience includes the Transport, Residential, Commercial, Educational, Hospitality, Mixed Use and regeneration sectors.

Jorge P Silva was born in Lisbon, Portugal, in 1976. He graduated in architecture at the Lusíada University of Lisbon, in 1998 and started his professional activity in 1994, collaborating in a small studio in Lisbon. He collaborates with Aires Mateus since 1998. Jorge holds several lectures and conferences all over the world representing Aires Mateus. He also coordinates nnumber of international design competiitons and projects: in 2002 for the international competition for the Grand Egyptian Museum (special prize),  in 2208 the competition for the renovation of the Bothanical Garden and Park Mayer area in Lisbon (winning project), in 2019 mixed buildings in Brazza neighbourhood in Bordeaux.

Elie is the Chief Executive Officer of the Sterling Group, a privately held investment and real estate firm that acquires and manages high potential properties and companies. Founded in 1988, Sterling Group takes a fresh and creative approach to investing and business building. The Sterling Group team is dedicated to creating real estate and business environments that meet the needs of the people they serve, and contribute to the community at large. Successfully achieving the balance between high performance and civic contribution has earned Sterling Group a reputation as a leader with integrity.

Clive Wilkinson is an architect, designer, writer  with particular expertise in the application of urban design thinking to interior design, specifically in workplace and educational communities. He was born in South Africa and educated in the United Kingdom, where he received his degree from the prestigious Architectural Association School of Architecture in London. His practice, Clive Wilkinson Architects, was established in Los Angeles in 1991 and is an acknowledged global leader in workplace design. He has created unique spaces for Disney, Google, Macquarie, Microsoft, Nokia and TBWA\Chiat\Day. In 2005, Clive was inducted into the Interior Design ‘Hall of Fame" and in 2006, he was named as a ‘Master of Design’ by Fast Company. In 2012, the firm was honored as the Winner for excellence in the category of Interior Design. Clive is a former Board Director of AIA|LA, a member of the GSA National Peer Registry, and has served as a keynote speaker at global media and design conferences. His book, The Theatre of Work, was published in 2019. His designs have received over 175 awards to date.

He is Lombardini22’s architect and Founding partner. Adolfo deals with the company’s Retail and Living design. Thanks to his exceptional know- how he is perfectly aware of the projects’ life cycle. He manages all its phases: the preliminary analyses, its implementation and its redevelopment. His philosophy is based on listening to clients and enhancing each project with a sustainable and cradle to cradle approach. His design approach is analytical and supported by a great attention to its correct functioning in time and at all levels. It always starts from the accurate creation of an architectural brief as an element to generate value. Giovanni graduated in engineering and architecture in 2008, having collaborated with a number of Italian architectural practices since 2006, including Iosa Ghini Associati in Bologna. In 2009, he joined the MIT Senseable City Laboratory as Research Affiliate. Since 2009, he has been collaborating with Carlo Ratti Associati, an innovation in design firm as a designer and project manager first, becoming the company CEO in 2017, in charge of opening a branch in the United States. In 2014, he earned an MBA degree from LUISS Business School in Rome. He has also been lecturer in Italian universities, as Politecnico di Torino, IED and LU.NA. Since 2019, Giovanni has acquired the role of Head of Architecture within Pininfarina, the Italian car design firm that is currently expanding its range of activities over design in a broader sense.